Texans Don’t Litter, Do They? 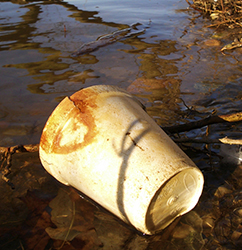 Litter is simply trash that is not disposed of in a trash can. It includes the obvious culprits such as plastic bags, cans, fast food wrappers, etc. You may be surprised about certain items that are considered litter. For example, food waste and other organic matter is litter—just because it’s biodegradable doesn’t mean it can be thrown on the ground. There are also sneaky offenders that are all considered litter, such as cigarette butts, small candy wrappers, or even trash that flies out of a car window or truck bed.

What Are the Penalties for Littering?

Littering is against the law and there are hefty fines for violations. For trash less than or equal to five pounds or five gallons, fines can be up to $500. Repeat offenses are even costlier, resulting in up to $2,000 in fines and 180 days in jail. Additionally, failing to cover your pickup truck load carries a fine of up to $200 for the first offense, and $500 for repeat offenses. Trash of more than five pounds is considered illegal dumping, which carries even steeper fines.

Since 1998, Don’t mess with Texas has been reporting on Texans’ attitudes and behavior towards littering, and the agency recently released the results of their newest survey.

Below are a few important statistics that will help you learn more about littering in our state.

How Can Texans Do Their Part?

Visible litter is down by 34 percent on roads maintained by the TxDOT. This success is happening despite an increase  in drivers on Texas roads. However, about 435 million pieces of visible litter still accumulate on Texas roadways each year—so there is still more work to do.

Learn how you can keep our Lone Star State beautiful.