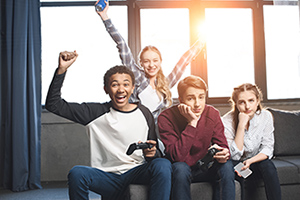 It's no secret that teens and kids love video games. This article can help you turn their passion into a lesson on energy conservation.

The features on the newest game consoles draw power, even when no one is using them. However, there are many ways to reduce a console's energy use and still enjoy its exciting features.

Use this article to make energy conservation relevant to your kids and to help them learn how to do their part.

Turn On Settings that Save Power

Disconnect the Xbox Kinect When You Aren’t Using It

The Xbox Kinect accessory uses up to 14 watts of electricity when you are using the game console, even if you aren’t using Kinect. Save electricity by disconnecting Kinect when you don’t need it. Turn Off the Controllers

The controllers of the PS4 can be programmed to turn off when not in use or to be set to turn off after 10, 30, or 60 minutes. Or, simply turn off your controllers when you’re finished, just like you would turn off the lights when you leave a room.

Some software updates are designed to help save energy. For example, after the release of a software update, the PS4 now powers down automatically and the USB ports reduce their energy use by 65 percent once the controllers are fully charged.

Running your cable box through your game console requires the console to consume energy, even when you are not playing it. Instead, connect each device into a different HDMI port so that you can turn them off when they are not in use.

Don’t Stream Through Your Game Console

There are many devices for streaming video content including game consoles. However, game consoles are the least efficient choice, using more energy than a digital media player (such as an Apple TV or Roku), smart TV, tablet, or laptop.

Need help with the energy-saving settings on your console? Check out the ENERGY STAR website for instructions.